To download and donate,
please head straight to this page

Thank you for being a part of this fundraiser!

MbM Gospel Choir and members of the Living Room Sessions joined forces in early January 2018 to record an original song by Motivation by Music’s founder and Creative Director and award-winning songwriter, Emily Bollon.  They have released Sun-kissed Bridge as a charity single – available as a free download, with the option to donate to the amazing Mustard Seed Autism Trust which is a small local organisation, based in Rushmoor and Hart, that offers a holistic approach in dealing with the complex needs of families living with autism. Registered charity: 1148938. This single was recorded by students at the University of Surrey Institute of Sound Recording and filmed by NV Media‘s mastermind, Nick Veira.

A chance meeting at the Eagle Radio Local Heroes awards ceremony in 2017 brought the two organisations together and they quickly found a special connection when choir members spotted that the lyrics of one of their songs shared the same inspiration as the charity’s name. “’Sun-kissed Bridge’ opens with a gentle reminder that we only need enough faith, courage and bravery for today – we can reach our goals one step at a time.” explained Motivation by Music’s founder and songwriter Emily Bollon.

“When we met the fantastic team at Mustard Seed and heard how they had started their work with families of autistic children, we just knew it was their song.”

The founders of Mustard Seed Autism Trust were in the studio to hear Sun-Kissed Bridge for the first time and help to get the recording session off to a flying start. Sarah Clements, one of the charity’s founders, shared her thoughts on hearing the song for the first time,

“The team at Mustard Seed Autism Trust are so excited that Emily Bollon and her choir are recording and releasing a song to raise funds for our work. ‘Sun-kissed Bridge’ is a beautiful song and we can’t wait for everyone to hear it! The words really reflect our journey: from the tiny seed that has grown into an organisation supporting hundreds of families in our local community. We really appreciate the kindness and generosity of Emily and all at Motivation by Music.”

The recording was made possible thanks to the use of the University of Surrey’s Institute of Sound Recording facilities and the support of sound recording students who gave their time to make sure the choir could capture a professional quality recording. 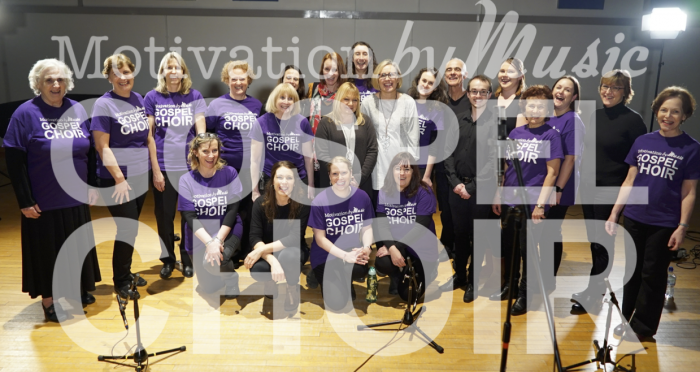 We had the privilege of welcoming Nick from NV Media to film out studio experience! All angles were filmed as we recorded our vocals live!

Become one our happy clients!

If you'd like to find out more about what we can provide for your team, then get in touch.